Not Always As Appears In Mainstream Media

Over time I’ve developed an intuitive sense (sort of a BS Detector).

When I heard reports of the latest gas attack on the “Rebels” (Muslim Brotherhood) I remembered the last time they tried this (not reported on CNN or MSNBC).

It remains to be seen if they can pull it off this time. It seems to be going well for them so far.

Now you may say “why would they kill their own people if this was a Rebel instigated gas attack? Are you kidding? They have no problem killing their own people including children (they believe the end justifies the means).

Here’s a good article I found on ZeroHedge.com

Overnight, it wasn’t Egypt but Syria that woke up to the latest massacre, this time in a chemical weapons-induced slaughter when more than 200 people were killed shortly after 3 am local time, in what would be by far the worst reported use of chemical arms in the two-year-old civil war. Naturally, Syrian activists promptly accused the President al-Assad of conducting the attack that killed numerous women and children even though it was their chemicial weapons warehouse in the Damascus area that was uncovered just over a month ago.

Not surprisingly the state TV and Syrian emissaries abroad promptly denied any responsibility for the attack. And, as on previous occasions, the traditional narrative of penning this wholesale murder of civilians on the ruling administration leaves much to be desired. So much so that even experts are now wondering if it wasn’t merely the latest provocation attempt by the US (and Al-Qaeda) -supported rebels to push public opinion further against Assad and permit the greenlighting of an eventual military escalation. 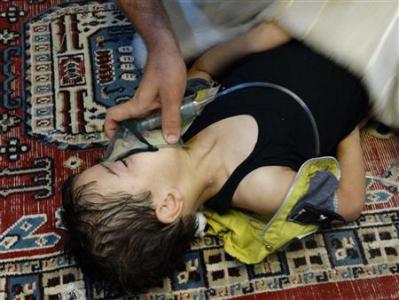 The timing and location of the reported chemical weapons use – just three days after the team of U.N. chemical experts checked in to a Damascus hotel a few km (miles) to the east at the start of their mission – was surprising.

“It would be very peculiar if it was the government to do this at the exact moment the international inspectors come into the country,” said Rolf Ekeus, a retired Swedish diplomat who headed a team of UN weapons inspectors in Iraq in the 1990s.

“At the least, it wouldn’t be very clever.”

Ekeus said the mandate of the U.N. team was limited to three sites but could be amended to investigate fresh claims – which would be simpler to verify than the other months-old cases.

“It is easier to do sampling and testing, and also to look at the victims, if there are sick people or even dead people (on the scene). It is easier to get to doctors and get to the place where the event happened.”

Charles Lister, an analyst at IHS Jane’s Terrorism and Insurgency Centre, also said it made little sense for the Syrian government to use chemical agents now.

“Nonetheless, the Ghouta region (where the attacks were reported) is well known for its opposition leanings. Jabhat al-Nusra has had a long-time presence there and the region has borne the brunt of sustained military pressure for months now,” he said, referring to a hardline Sunni Islamist rebel group allied to al Qaeda.

“While it is clearly impossible to confirm the chemical weapons claim, it is clear from videos uploaded by reliable accounts that a large number of people have died.”

So let’s see: an irrational act by a man who knows every act of his is under the interantional media microscope, and not just any act but the worst chemical weapons attack to date which would promptly force a “democratic” intervention into his country, or merely a false flag attack in which the so-called rebels, aka Qatari mercenaries, are killing their own to pin the blame, and the international retaliation, on Assad?

Deaths are certainly tragic, but what would be just as tragic is if a western government is backstopping this wholesale murder of innocent civilians merely to promote its own petrodollar agenda.