Comes From Family Worth $20 Million

This whole thing smelled funny from the get-go.

In this current environment things are almost never what they appear; instead, look for a possible agenda behind the curtain.

His father is a railroad vice president and made over $8 million last year
Gateway Pundit | Jim Hoft – November 11, 2015 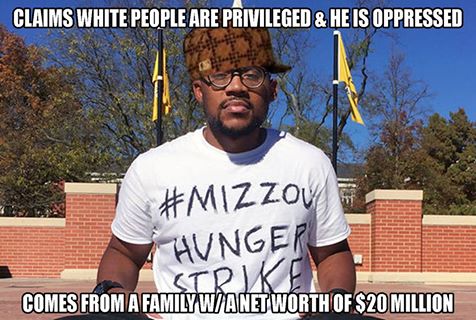 Jonathan Butler, the University of Missouri graduate student who went on a weekend hunger strike, comes from a family worth $20 million. His father is a railroad vice president and made over $8 million last year.

He argued he was oppressed.

Jonathan Butler, a central figure in the protests at the University of Missouri, is an Omaha native and the son of a railroad vice president, the Omaha World-Herald reports.

Jonathan Butler played high-school football at Omaha Central High, where he won a state championship, and earned a bachelor’s degree in business administration from Mizzou, the newspaper reports. He is working toward a master’s degree in educational leadership and policy.

He is a member of a prominent Omaha family. The newspaper says that Butler’s father is Eric L. Butler, executive vice president for sales and marketing for the Union Pacific Railroad. His 2014 compensation was $8.4 million, according to regulatory filings with the Securities and Exchange Commission.
http://twitter.com/OWHnews/status/664223082358243328/photo/1?ref_src=twsrc%5Etfw