Facebook Social Network now has 1.6 billion users which gives it a lot of power on the internet

I’m only guessing, but based on what I’ve seen of Mark Zuckerberg, founder of Facebook; he seems to fancy himself as some sort of Godlike Elitist

I’m only theorizing here, but it only seems logical that the forces that are trying to take global control (NWO, Shadow Govt or whatever they call themselves), would co-opt Zuckerberg by convincing him that he is now in a position to be a major player “to help save the world”

Arjun Kharpal | @ArjunKharpal
Friday, 27 May 2016 | 7:19 AM ETCNBC.com
Facebook boss Mark Zuckerberg is the “dictator” of “the biggest nation in the world”, the co-founder of file sharing site The Pirate Bay, told CNBC on Friday, as he denounced the centralization of power on the internet. 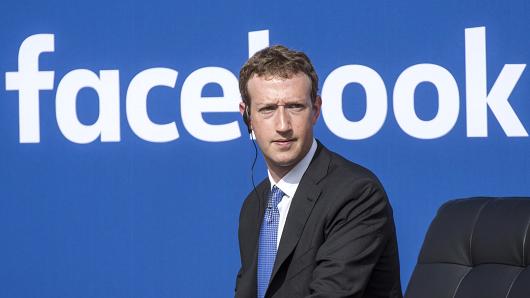 Speaking during an interview at The Next Web conference in Amsterdam, Peter Sunde said that there is “no democracy” online.

“People in the tech industry have a lot of responsibilities but they never really discuss these things … Facebook is the biggest nation in the world and we have a dictator, if you look at it from a democracy standpoint, Mark Zuckerberg is a dictator. I did not elect him. He sets the rules,” Sunde told CNBC.

“And really you can’t opt out of Facebook. I’m not on Facebook but there are a lot of drawbacks in my offline world. No party invitations, no updates from my friends, people stop talking to you, because you’re not on Facebook. So it has real life implications.”

Facebook declined to comment when contacted by CNBC. The social network has 1.6 billion users on its platform.
Mark Zuckerberg, chief executive officer of Facebook Inc.,
Zuckerberg: I want to cure all diseases this century

Sunde is a left-winger best known for co-founding The Pirate Bay, the notorious file sharing site which landed him in jail in 2014 for which he served a five month sentence. His other co-founders were all found guilty of copyright infringements.

To demonstrate his point, Sunde cited the example of when German Chancellor Angela Merkel was overheard at a United Nations meeting confronting Zuckerberg about anti-immigration posts on Facebook.

“That’s kind of what it comes to. We send major leaders of Europe to ask him to stop interfering with our local culture. How did we end up in a situation like this?,” Sunde said.

“If politicians were a little bit more hard-core and actually believe in this they would be able to fix it. If we say Facebook doesn’t agree with our rules in our country we are going to stop Facebook in our country. We censor a lot of things, why not censor Facebook?,” he added.
Donald Trump and Mark Zuckerberg
Trump spokeswoman hits out at Zuckerberg

Sunde also decried the technology world’s lack of perspective. He denounced Facebook’s policy requiring people to use their real name, as in some countries, this can get people persecuted and makes it hard to organize political movements.

“The reason for the real name policy is Mark Zuckerberg wants to make another dollar.”
This firm may have just killed the hype surrounding blockchain

Still, Facebook has been working to reassure its users about privacy. It released a new privacy policy last year that made it easier for people to decide which posts are public or private. And WhatsApp, which Facebook owns, recently introduced full encryption.

Zuckerberg has also shared his own thoughts on privacy. In Apple’s recent tussle with the FBI over unlocking an iPhone that belonged to one of the San Bernardino shooters, Zuckerberg said he is “sympathetic” to Apple. The iPhone maker refused to help authorities unlock the phone.