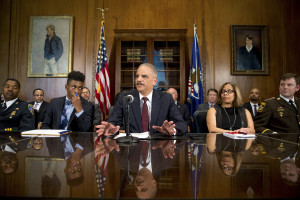 on Thursday, March 12, 2015, in Washington. The program in these six cities will look at the police-community relationship as well as develop site-specific plans that will enhance procedural justice, reduce bias and support reconciliation in communities where trust has been eroded. Also pictured is Assistant Attorney General Karol V. Mason, center right, of the Office of Justice Programs, second from right, and Gerard Contee, center left, who told President Barack Obama last month that he wanted to be Attorney General of the United States when he grows up. (AP Photo/Andrew Harnik)