The Donald says things during this interview that are truly candid and you will not hear on other interviews.

While watching the Trump interview on Infowars.com I found that my attention drifting to the building visible through the window behind him. I don’t know how far away some of those windows are from Trump Towers, but someone needs to get word to Trump to install bullet proof glass ASAP.

Watch the video below and please pass this on. WHAT’S LEFT OF YOUR COUNTRY DEPENDS ON IT! 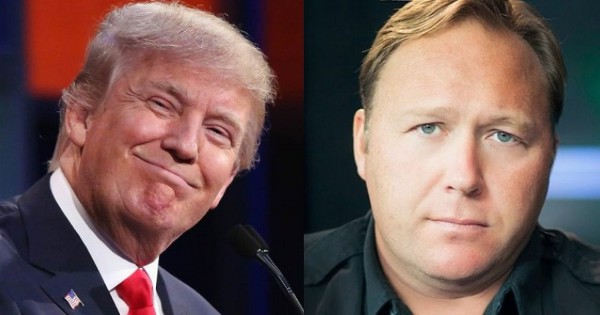 Republican presidential frontrunner Donald Trump told Alex Jones the two would be “speaking a lot” in future after a surprise radio interview that rocked the political establishment earlier today.

The Donald joined Jones live from Trump Tower in New York City for a 35 minute discussion on everything ranging from Hillary Clinton’s corruption, to ISIS, to his most recent controversy about Muslims in New Jersey celebrating 9/11.

At the end of the interview, Trump made reference to the mere fact of him appearing on the show, suggesting it would cause waves.

“I just want to finish by saying that your reputation’s amazing – I will not let you down – you will be very very impressed I hope and I think we’ll be speaking a lot but you’ll be looking at me in a year or two years, just give me a little bit of time to run things,” Trump told Jones.

“A year into office, you’ll be saying ‘wow I remember that interview, he said he was gonna do it and he did a great job’ – you’ll be very proud of our country,” added Trump.

See The Rest Of The Trump Interview HERE