Is There Some Agenda Behind This? 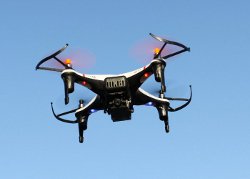 It just seems that nothing “Just Happens” these days.

Usually after some time passes, and with some probing research by the “New Media” (Non-Mainstream), something turns up.

It just seems a little suspicious that all these drone sightings by pilots near airports seem a bit odd.

I just have a feeling that something is behind this.

DENVER — The number of airline pilots who report seeing drones near airports is rising. There have been some around the Newark Liberty International Airport in New Jersey during the past few days.

Drone That Could Fly Indefinitely

Able To Recharge In Mid-Air

Remember how Winston Smith was under constant surveillance by BIG BROTHER?

Inside his apartment and outside from above at all times.

​Droning on Forever? Boeing Patents UAV that Could Fly Indefinitely, Recharge in Mid-air

We originally posted this video to the blog on this site back in Apr 2012, but it is even more relevant now.

This is an amazing drone simulation video that was emailed to me. After inspection I see it was published to Youtube on Oct 3, 2014 with 270,218 view to date.

The title is Jpay 3.0 special ncs, and author is listed as Herve Pellarin.

The amount of work put into this animation is truly amazing, and it’s worth watching just to admire the work. Viewing time 12 min 5 sec. 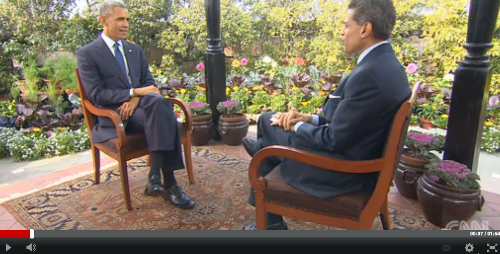 I put together a compilation of some of the current drone technology from Popsci (Popular Science Magazine).

Although not included in this overview, I have seen some experimental work with drones the size of mosquitoes. Here is a short video:

The Robotics Revolution Is Happening 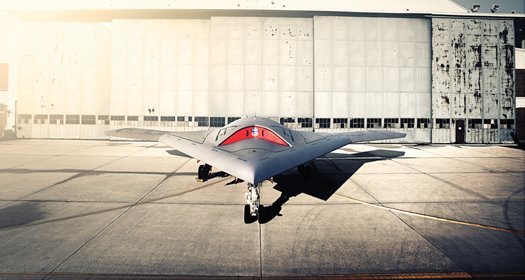 “We are still at the ‘horseless carriage stage of this technology,” Peter Singer says in a new Brookings Institute piece on robotics. Singer, director of the 21st Century Defense Initiative and a senior fellow at Brookings, knows what he’s talking about. His book Wired for War is the seminal text on the topic of robotic warfare and the ongoing robotics revolution. And if you’re not going to read the book (and really, you should), he’s posted a fantastic piece on the state of the robotics revolution over at Brookings that can quickly bring you up so speed. As the U.S. prepares to open the national airspace to unmanned robotic systems and our various foreign engagements keep military robotics up high on the defense budget, we’re all taking part in an era of unprecedented robotic research and development, prompting Singer to ask: “Are we going to let the fact that what is unveiling itself now seems like science-fiction to keep us in denial of the fact that it is already part of our technological and political reality?” 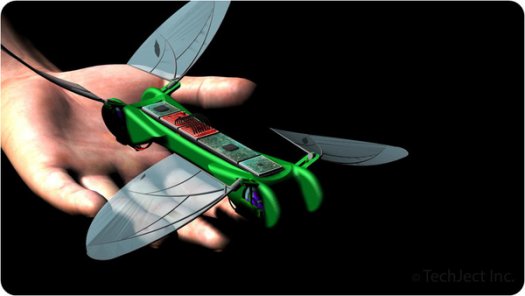 The Georgia Institute of Technology has plopped its robotic dragonfly drone up on Indiegogo to be crowdfunded. It’s a pretty impressive device: a four-winged, superlight flier with the capability to hold a camera, plus GPS, Wi-Fi, and compatibility with smartphone apps. But one of the coolest ideas comes from the dragonfly itself: the tiny, 6-inch Robot Dragonfly can glide like an insect rather than having to constantly flap to hold itself aloft, like the Parrot AR.Drone 2, so its battery life reaches up to half an hour. (Comparatively, that’s a lot.) You can snag one for as low as $100 if you fund now–apparently it’ll retail for more than twice that.

Inside The Swarming Quadrotor Lab Of KMel Robotics

A Philadelphia robotics startup is blazing trails in the nascent unmanned systems industry by focusing on technology, and ignoring the killer app.
By Clay Dillow Posted 10.11.2012 at 8:58 am 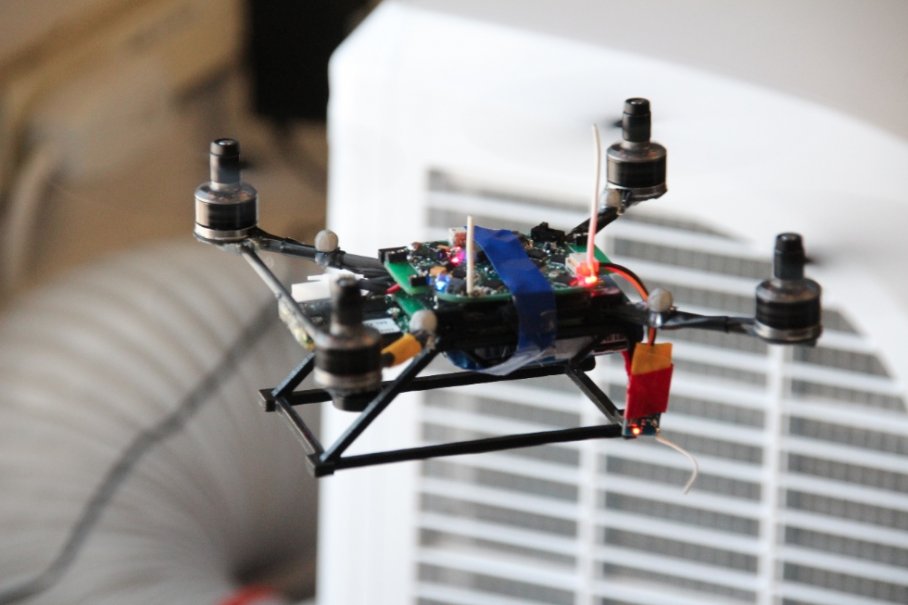 KMel’s Tiny Nano Plus Quadrotor KMel Robotics custom designs quadrotors from scratch to suit the research needs of their customers (the University of Pennsylvania is their primary client). Smaller quadrotors are typically more forgiving when the students crash them, KMel’s co-founder Alex Kushleyev says. Still, he says, “We use a lot of tape.” Clay DIllow

Every summer, the most creative minds in advertising and communications gather in the French resort town of Cannes, on the Cote d’Azur, to celebrate their own brilliance at the Cannes Lions International Festival of Creativity. These are the forward-thinkers, the industry’s most prominent problem-solvers, the crisply styled “creative types” who spotted the next big thing was before it was the next big thing, and then made it so. So perhaps it’s fitting that it was there, amid lavish parties and award ceremonies held for the world’s elite trend-spotters and trend-setters, that Alex Kushleyev and Daniel Mellinger, two 27-year-old roboticists living in Philadelphia, briefly grabbed the spotlight.

Kushleyev and Mellinger weren’t in Cannes to swap business cards or brand strategy over flutes of grand cru. The duo have little interest in selling cell phones or mid-luxury sedans, or anything else for that matter. In fact, that’s what makes KMel Robotics, their young startup, so unique: though they are a leader in their field, they aren’t trying to sell their technology. Kushleyev and Mellinger specialize in quadrotors, those small, four-propellor hovering aircraft that can carry small payloads and, in the right setup, work together to perform complex tasks. KMel is working far enough ahead of the curve in this space that even Kushleyev and Mellinger have no idea what the killer application for their technology is–and they’re fine with that.

That’s how they ended up on the French Riviera this past June, logging long, sweltering hours in a warehouse a short drive from Cannes’ legendary beaches while preparing the theatrical centerpiece for global brand behemoth Saatchi & Saatchi’s New Directors Showcase. Now in its 22nd year, Saatchi’s Cannes event has become something of a competition within the agency itself, with each theatrical piece attempting to outdo the previous year’s. This year, Saatchi’s creative team wanted to do something unique while playing with the theme of a “grand creator”–complete with beams of light streaming down on the audience from above and bodies zipping around overhead.